Katie Shepherd, a first-year student at the Columbia University Graduate School of Journalism in New York, is the recipient of the Virginia Press Women Foundation’s 2015 Agnes Cooke Scholarship.

Katie was recognized at the fall meeting of Virginia Professional Communicators, with which the foundation is affiliated, at the Virginia Press Association in Glen Allen, Virginia, on Friday, Oct. 16. The VPW Foundation awards a scholarship every year to a deserving Virginia college student who is interested in pursuing a career in communications. Katie received a $1,000 scholarship and a year’s membership in VPC. 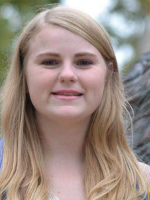 Katie said she aspires to produce the kind of journalistic work that impacts people’s lives and gives a voice to those who would otherwise be unheard.

“The Agnes Cooke Scholarship made it possible for me to attend the premier journalism school in the world and practice my skills as an emerging reporter,” she said. “Without it, I wouldn’t have the opportunity to develop the skills I need to have a meaningful and fulfilling career as a journalist.”

Katie, who is from Stafford County, Virginia, graduated this past spring from the University of California, Los Angeles, where she earned a bachelor’s degree in English and was campus news editor and enterprise writer for the UCLA Daily Bruin and a writer for the student-run UCLA Prime Magazine.

After graduation, she worked as a summer reporting intern for the Los Angeles Times. She previously interned at the Free Lance-Star in Fredericksburg, Virginia, where she focused on general assignment and breaking news, including the death of a local Marine killed in action. She has also worked as a public relations intern for Saltzman Communications in Beverly Hills, California.