Kayla Solsbak, a sophomore at the University of Richmond, is the recipient of the Virginia Press Women Foundation’s 2016 Agnes Cooke Scholarship.

She was announced as this year’s scholarship winner at the annual conference of Virginia Professional Communicators, with which the foundation is affiliated, at the George Washington Inn in Winchester, Virginia, on Friday, April 15. The VPW Foundation awards a scholarship every year to a deserving Virginia college student who is interested in pursuing a career in communications. Kayla received a $1,000 scholarship and a year’s membership in VPC.

Kayla, who is pursuing a bachelor’s degree in journalism, said the focus of her career goals is print and radio journalism and that she is especially passionate about education reporting. 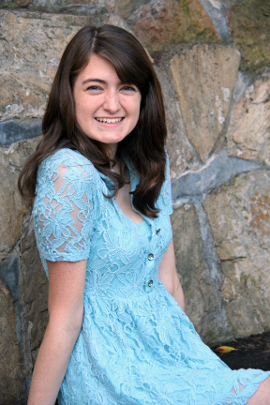 “I am immensely honored to receive such a generous award from such an admirable organization. As a young journalist, I am inspired and encouraged by the women of the Virginia Press Women Foundation who are opening doors for me and my peers,” Kayla said. “With the help I’ve received from the Agnes Cooke scholarship I can continue telling important Virginia stories as I progress in my journalism education.”

Kayla, who is from Lakeside, California, works for her campus newspaper, The Collegian. She started the current academic year as features editor and currently serves as news editor.

Her op-ed “No, John Kasich, I don’t want Taylor Swift Tickets,” written following the Republican presidential candidate’s visit to the University of Richmond in October 2015, was picked up by MSNBC, New York Magazine, the Huffington Post and other media outlets.

Kayla has also worked as an intern for Bustle, an online women’s magazine, and has written for Envision the James, the Henrico Citizen and other Virginia publications.